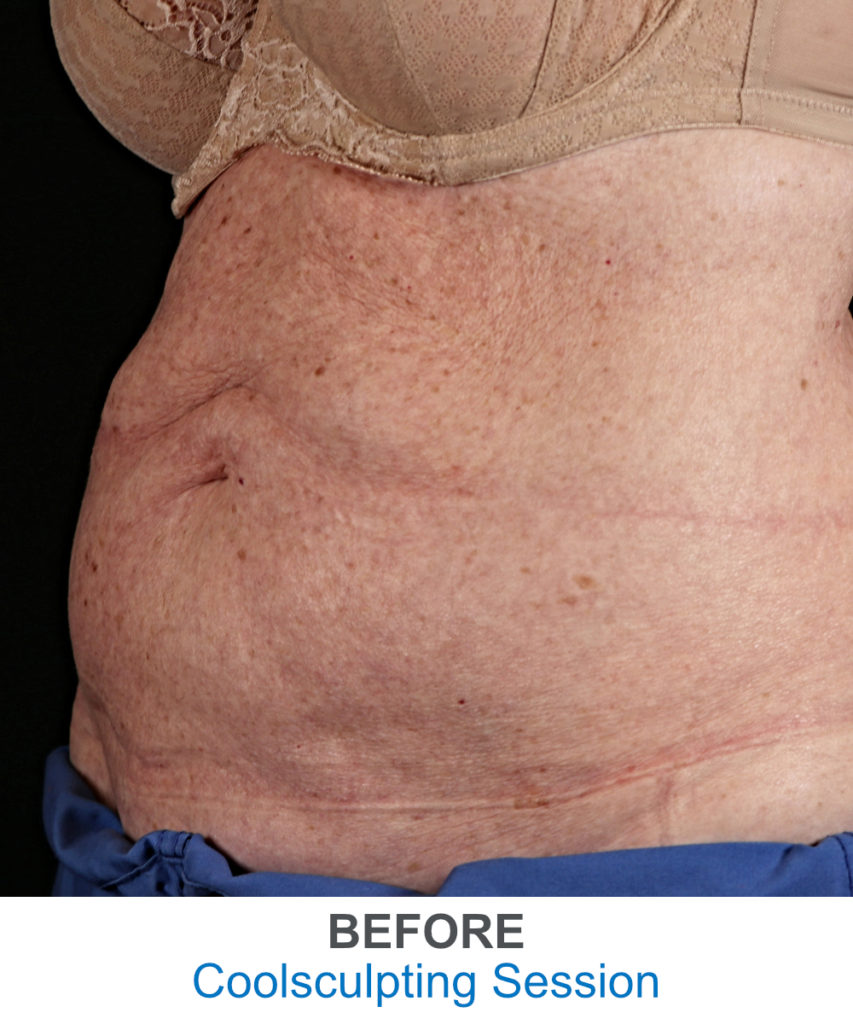 See how Coolsculpting results can improve over time long after the treatment has been completed! This female from San Diego desired non-surgical body contouring with Coolsculpting to help target unwanted belly fat. She really desired to have a flatter tummy since this was one area that continued to bother her despite eating healthy and maintaining a reasonable exercise regimen. But she didn’t want to have liposuction given the more invasive nature of surgical fat removal. After researching her options, she decided to go with Coolsculpting as offered by Dr. Hilinski and his incredible medical spa staff.

She underwent 2 different treatment sessions that were done to help sculpt her tummy fat. The procedures were performed in our Coolsculpting treatment room, which is set up to make patients feel comfortable and relaxed as their fat is frozen away. The treatments took about 90 minutes each with literally no downtime. In fact, this patient is a registered nurse and was back to work the following day without any complaints at all and no disruption in her work schedule. This is pretty typical for our patients seeking non-surgical fat reduction – regardless of what area is being treated. Her Coolsculpting treatments were separated by about 6-8 weeks in order to allow her body to process the fat that was frozen away during the 1st session. 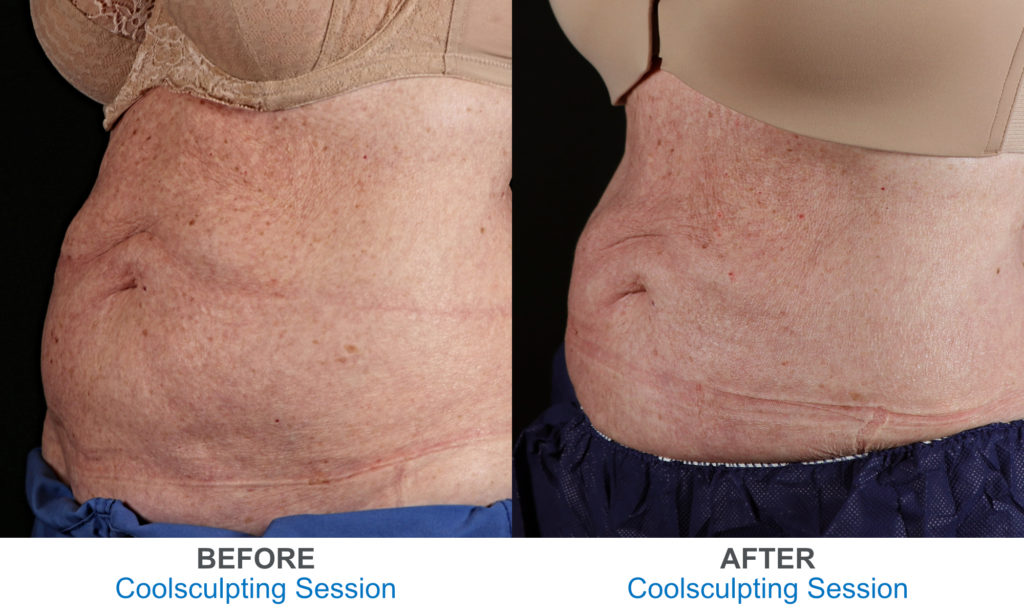 So here is her result approximately 1 month after the 2nd Coolsculpting treatment. As you can see on these oblique photos of her tummy, she has quite a nice improvement. Her tummy fat is definitely reduced and her abdomen looks flatter. Does she still have some residual excess tummy fat? She certainly does. However, there is a marked improvement as you can readily see. And if you asked the patient, she was quite excited about the cosmetic improvement in her abdomen noted at this point.

The good news is that many Coolsculpting patients will continue to see more cosmetic improvements in their body months after the initial changes are seen – including this patient here. The key is to make sure you are continuing to maintain a healthy diet along with regular exercise. If you gain any significant amount of weight after Coolsculpting the improvements seen may not be noticed at all – which is precisely the same thing that happens when you have surgical liposuction. So as long as you don’t change your daily habits considerably – meaning you eat healthy and exercise, the cosmetic enhancements from the fat freezing session(s) should continue to get better.

To prove this point, we have provided a series of photos of this same patient several months after she completed her abdominal Coolsculpting. And as you can readily appreciate, her tummy is even flatter 2 months later without any intervening treatment being done! This is because some of the fat that was frozen during Coolsculpting was still getting absorbed away by the body when the 1 month after photos were taken. In addition, her skin was still shrink wrapping down to the new smaller waistline that Coolsculpting was able to provide her. These physiological processes can take upwards of several months in most patients, which is why we usually reserve judgement on Coolsculpting results for this period of time. So if you look at this case example 3 months after her fat freezing was completed, her tummy is even flatter than it was at 1 month.

Before and 3 Months After

And if you directly compare her Coolsculpting results from before to 3 months after, there is even more of a distinct improvement seen. In fact, this type of non-surgical cosmetic enhancement really does rival what some patients get from surgical liposuction of the tummy – but without the incisions, scars and risks! 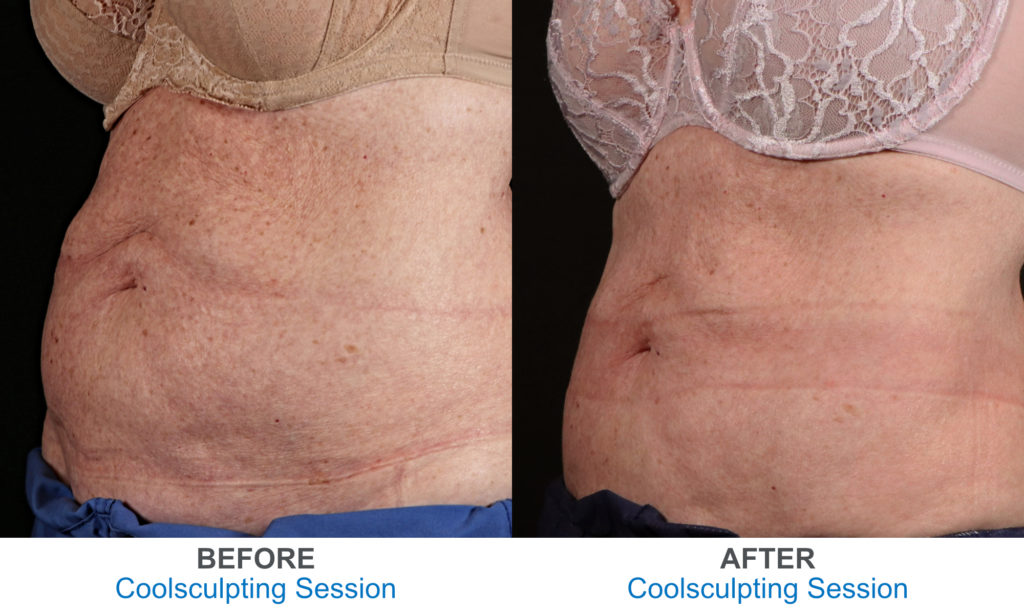 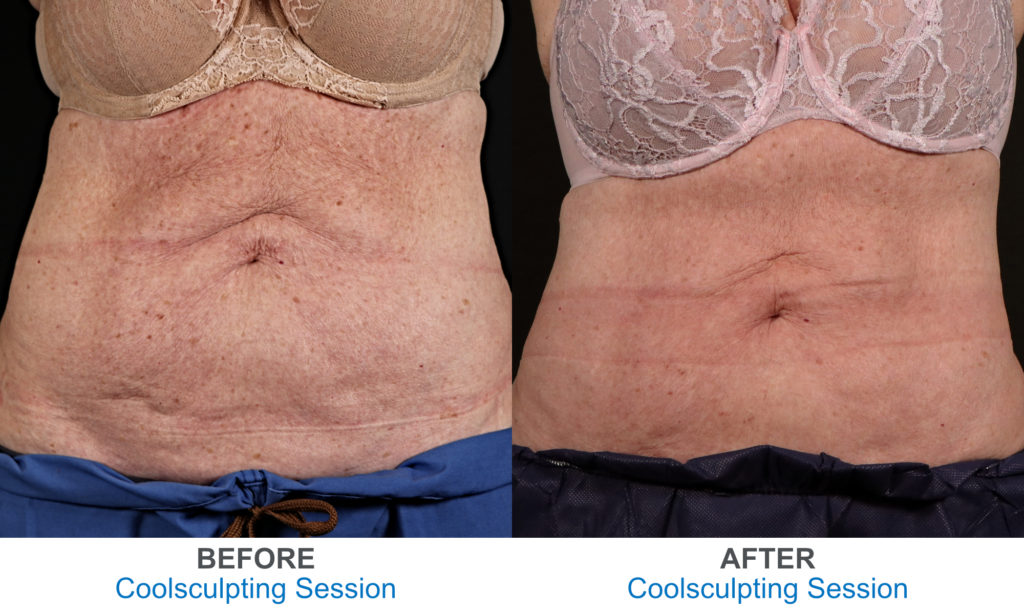