| Blog | Can You Alter The Nose Height & Length At The Same Time?

Can You Alter The Nose Height & Length At The Same Time?

This is a question I have seen on some online rhinoplasty forums and decided to answer with a patient example. This patient was recently seen in follow-up evaluation in our office and was thought to be a good case example of altering nasal height and length at the same time. His main complaint on presentation was the convexity, or bump, as seen best on his profile view. In addition, he had ptosis, or drooping, of the nasal tip region. On frontal view this translated into a somewhat flattened appearance when looking at the lower half of his nose. We had a long discussion regarding possibilities with undergoing a rhinoplasty procedure. Specifically we discussed reducing the height of his bridge in concert with elevation of his nasal tip region. All the while, we emphasized the need to maintain a strong, masculine bridge along with an ethnically consistent look. He decided to proceed with the surgery, which was performed nearly a year and a half ago. As you can see from the diagrams below, we were able to reduce his bridge height at the same time as shortening his nose by repositioning his nasal tip. With regard to the latter, I was able to detach his lower lateral cartilage on each side (red outlined cartilage) and reorient their position to achieve the desired tip shape. This was done primarily to shorten the nose and erase signs of the drooping tip. On side view, you can see that the angulation of his nose was altered to create more of a 90 degree angle between his nose and upper lip. In addition, the bridge height was reduced sufficiently (blue line) to allow a nice natural transition from his bridge to the tip. Overall, he has a significant improvement in his nasal appearance with a nose that is more refined yet one that still fits into his remaining facial features. To see this patient’s full rhinoplasty photo series in color, click here for a link to our rhinoplasty gallery. 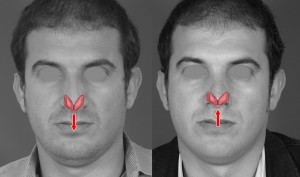