One of the main differences between my practice and other plastic surgeons’ practices is that I have additional advanced specialty training in reconstructive work related to the nose. This more commonly involves patients that need a plastic and reconstructive surgeon for functional, or medically indicated, work that needs to be done. This is commonly referred to as a reconstructive septorhinoplasty. This reconstructive septorhinoplasty patient from San Diego was recently seen in our office and was thought to be a good example of how we integrate reconstructive nose work with cosmetic reshaping of the nose. He presented primarily with complaints of difficulty breathing thru his nose. On preoperative examination he was noted to have asymmetry of his nose where the base was different from one side to the other. On frontal view of his nose you can see how it is canted off to his right side and his nostrils are different from left to right. From underneath his nose, you can easily appreciate how his left nasal airway is nearly completely blocked. This was from deviation of his septum, which happens to be a common cause of nasal obstruction. He elected to undergo surgery to help improve his nasal airway function while also providing him more symmetry. His surgery was performed with use of cadaveric costal, or rib, cartilage grafting. This was used in order to have sufficiently strong and plentiful material to reconstruct the nose. A caudal strut graft was used to stabilize the tip while providing more symmetry. In addition, a long strut graft was used along the left side of his bridge to stabilize his dorsal support and contour. Internally, a formal septoplasty was performed to straighten out the deviated septum and improve the internal nasal airway. The end result can be seen in the before and after photos below. Notice how on his frontal view his nose is now much more symmetric and fits his face more appropriately in terms of balance. From below, you can see how his nostrils are now much more even. In addition, his septum is now much straighter. The end result for this reconstructive septorhinoplasty patient is a nose that is more symmetrically shaped for his face and one that is much more efficient when it comes to breathing. 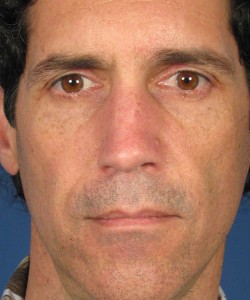 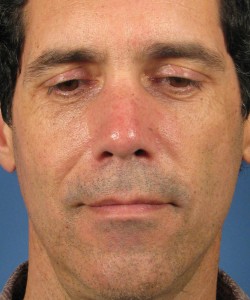 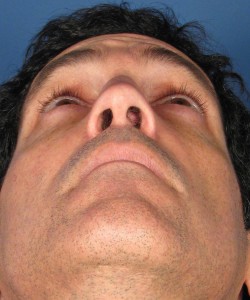 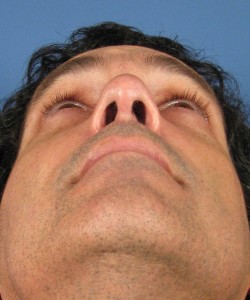