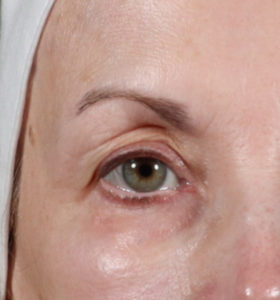 So can the plasma pen actually provide an upper eyelid lift result without making any surgical incisions? The answer is – it absolutely can! The proof – as they say – is in the pudding.

This very pleasant lady came to our office inquiring about possible treatment for her excess upper eyelid skin. As you can see in this close-up photo, she had redundant skin folds across the upper eyelid region that gave the appearance of her looking prematurely tired and aged. This is actually an incredibly common condition, especially in patients over the age of 45 years old. As we all start to age, this already very thin eyelid skin begins to lose elasticity (the rubber band quality that snaps back easily), which can result in the eyelid skin having a heaped up appearance.

So how do patients typically deal with these excess upper eyelid skin folds? Up until recently, upper eyelid blepharoplasty (a surgical eyelid lift) was really the only reliable method to address this cosmetic concern. As predictable and successful as it is, there are those patients who simply don’t wish to have an upper eyelid surgical procedure due to concerns of abnormal scarring and an unnatural looking shape as a result of the blepharoplasty.

Fortunately, we now live in the era of plasma skin tightening, which offers patients with excess upper eyelid skin a new alternative to consider when it comes to rejuvenation. Plasma skin tightening is also commonly referred to as fibroblast skin tightening. The basic concept of plasma pen cosmetic skin treatment involves using a novel form of energy (plasma) to induce tightening of the skin. The plasma is delivered via a medical device that is called a plasma pen. The tip of the pen is hovered just a few millimeters over the skin surface and is then activated. As this is done, plasma energy is created between the pen and the skin – and can be readily seen as a brief spark. It is this brief creation of plasma energy that causes a rapid tightening of the skin – which can sometimes be seen even by the naked eye. In addition, the underlying skin layers are stimulated by the heat energy to respond in the form of collagensis – or creation of collagen fibers that further help to rejuvenate the skin. Within a certain region, tens if not hundreds of spots are treated using a grid-like pattern made with the plasma pen. So across an entire treatment area skin tightening is occurring uniformly based on the density and extent of plasma pen spots created.

When it comes to the upper eyelid and excess, unwanted skin folds, the plasma pen has become an increasingly popular choice because it can tighten the skin without having to make any incisions. Because the upper eyelid skin is so thin compared to other areas of the body, it responds quite favorably to the plasma pen. In addition, the plasma pen can be used in a very precise manner to help target the excess eyelid skin in specific patterns and locations based on individual aging. One of the great things about the plasma pen upper eyelid lift, or non-surgical blepharoplasty, is that no incisions (cuts) need to be made. The entire procedure can be done using just topical numbing cream that is applied about an hour before the procedure is done. Patients will usually feel a little warmth as the plasma pen eyelid treatment is done. But sharp pain and discomfort are not the norm. At the conclusion of the plasma pen eyelid lift, patients will see a grid of brown and black dots that represent each treatment spot. We will typically apply a colloidal ointment on the treatment area to help promote initial healing. It is then recommended that you leave the area alone for the first several days after the procedure. In most cases, the brown and black dots (carbonization spots) will fall off and fade away within 4-7 days of plasma pen treatment. Some patients will see a faint redness to the underlying skin, which can be easily camouflaged by make up.

So here is the proof in the pudding when it comes to whether or not plasma pen can lift the upper eyelid skin. Results shown here are after just a single treatment of the upper eyelid region and were taken approximately 2 months after the procedure. As you can readily see, there has been a marked improvement in the amount of excess upper eyelid skin. Whereas she had redundant folds across the eyelid prior to plasma pen, she now has minimal wrinkling. This demonstrates loud and clear the power of plasma pen to lift the upper eyelid in a non-surgical manner – without making an incisions and without surgical scarring. If you have extra upper eyelid skin and are considering an office-based cosmetic treatment option, we recommend you consider possible plasma pen skin tightening with the medical spa staff at the office of Dr. John Hilinski. 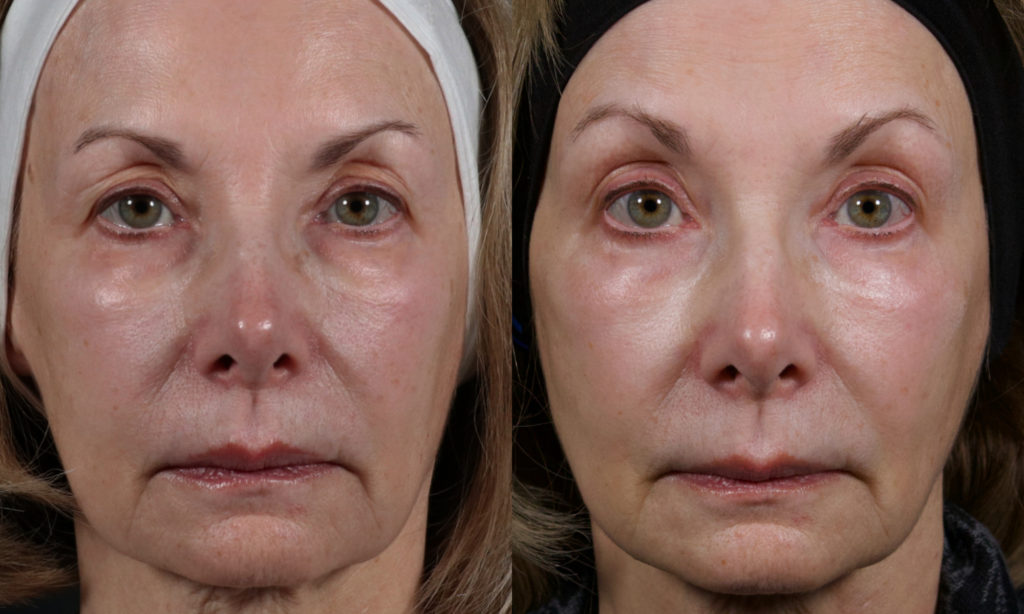